[Verse 1: Future & Travis Scott]
I made you get that Richard Mille and bust it down, bitch
I made you get that Patek, bust it, bust it down, bitch
I came from out the jungle with this shit written on my arm (No cap), yeah (Yeah)
I'm a franchise nigga, yeah (You like a hundred mil' up)
Yeah, ten Cuban links, I got game (Two hundred million)
Yeah, bought my first Rolex servin' 'caine
Yeah, told ya main thing, she the least, she can pour my cup
I put pink diamonds in your teeth, yup (Pluto)
Fully loaded, tote that magazine, yup (Super)
Bitch, I'm rollin' and I'm on codeine, yeah (Bitch, I might)
Pussy good and deep, she belong to the streets, yeah
Swag in Tokyo and the plug Japanеse, yeah
I been gettin' my chеck before I knew what was Nikes (Knew what was)
Mixed breed bad bitch, bite me like I'm Tyson
P-J X-rated, know I make it thunder and lightnin' (Yeah)
Take that nigga bean and bring my hundred thousand ones (Ayy)
One fifty for the walk through, I'm totin' my gun (Pew)
Me and slatt, slatt, that super slime and shit (Slime, ayy)
Yeah, swappin' hoes out, we just slime this bitch up (Swappin', yeah, alright)
Watch so froze, know what time is now
Yeah, sak pasé, we shootin' confident (Nap boule)
Buy a bitch a Birkie, that's a compliment, yeah (Straight up)
Ballin' like the Lakers, want a championship, yeah (Ooh, ooh)
Pluto, Freeband Gang (It's lit)

[Chorus: Travis Scott & Young Thug]
Yup, in my white tee (Yeah)
Yeah, call up Hype Williams for the hype, please (It's lit)
Uh, they gon' wipe you before you wipe me (Phew)
On boxes of checks, not my Nikes (Ooh, yeah)

[Verse 2: Travis Scott & M.I.A.]
Cacti's, not no iced tea (Ah)
Uh, got 'em bamboozled like I'm Spike Lee (Ah)
Uh, you need more than Google just to find me (Ah)
Uh, I just called up bae to get her hyphy (Ah, ooh)
Incredible, icky-icky, general
I just start the label just to sign me
Uh, me and CHASE connected like we Siamese (Woo, woo, woo, ooh, ooh)
Uh, we've been on the run, feel like a crime spree, talk to me nicely (Yeah)
(I seen his face, seen it) Yup, on his white tee, uh (Let's go)

[Chorus: Travis Scott & Young Thug]
Yup, in my white tee (Yeah)
Yeah, call up Hype Williams for the hype, please (It's lit)
Uh, they gon' wipe you before you wipe me (Phew)
On boxes of checks, not my Nikes (Ooh, yeah)

[Outro: Travis Scott & M.I.A.]
'Scuse me
Backin' out of the cave, we built this shit off of pain
In the cup it built, I'm double-cuppin' champagne
Come through in quintuplets, automatics, same name
Tryna show all my young niggas how to start up, believe
Coming through with no top, she showin' in Mickey D
After twelve A.M., come through with special
Elevate, up the top, this shit got levels 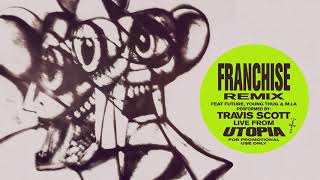 Jackboys & Travis Scott - What To Do?

Martin Garrix feat. Bono & The Edge - We Are The People

I need a man who's patient and kind Gets out of the car and holds the door I wanna slow dance in the living room like We're eighteen at senior prom and grow Old with someone who makes me feel young I...

Forget all of thе tears that you've cried It's ovеr (Over, over, over) It's a new state of mind Are you coming, my baby?