Nas - Til the War Is Won Text

Songtext zu Til the War Is Won


[Verse 1: Nas]
You know I love you different, my queen, my mother, sister
Protect you with my life, let's deconstruct the myth-uh
You just depressed a bit, and only good for sexin' with you
Let's dismantle that, it's a man you lack
You don't need us, you could handle that
Let's see where the black family at
We need each other, with bad tempers, we defeat each other
Single mothers, my heart's bleeding for you
These coward men, that were beating on you (Never me)
Let's silence them, with a silencer
For the violence of relationships
Hold your head up, don't take that shit, run away from it
I shoulda ran away myself, the amount of pain I was dealt
And I'm a man, my job is to help
Single parent home, came up, now the man is grown
Mom's gone, pop's here, wish God reversed the roles
(Sometimes) If I could've chose, subsidized housin'
Sometimes witnessin' the most foulest things would arouse us
We became numb like pure 'caine on the tongue
To the pains from economical strains

[Verse 2: Nas]
2020 flows, everything getting exposed (Exposed)
Who really the bros? (Bros) Who really is goals? (Goals)
Who ready to let it go? All the grudges we hold (Uh)
It's too many fallen soldiers NY to the 'Go (Chi-Town)
Late night outside, you hear the forty drum (Baow)
In every ghetto and all the slums (For real)
These laws made to slaughter us (Damn)
I give all I have 'til the war is won

[Verse 3: Lil Durk & Nas]
I was servin' out my mama crib, she ain't know about it (She ain't know about it)
Complaining about my rent, but I know my mama got me (My mama got me)
She told me to be a man, and never sleep through problems (Sleep through problems)
University of the streets, I ain't plan on going to college (Oh yeah)
Why you crying 'bout low income and welfare? (Ooh)
You ain't the only one going through it, this everywhere
Better hold your head, I know it don't feel fair
Reason my people dead and they know I still care
Depending on the people, then you gotta do better
Black lives matter, I'm for real, it do matter (For real, it do matter)
Black-on-black crime, they still do it to whoever (Whoever)
Talking to the trenches, we just gotta do better (Do better)
He think he Martin Luther, but he tryna be a shooter (Tryna be a shooter)
Got his car took, he ride with guns in the Uber (In the Uber)
I'm talking where we from, we carry MACs, but no computers (No computers)
He got out yesterday, but he went in when he was juvie (Chi-Town)

[Chorus: Nas]
Diabolical games put on our future kings
And our future queens, y'all the strongest ones (Yeah)
May God gives strength to women who lost their sons
I give all I have 'til the war is won

Nas - Til the War Is Won Songtext 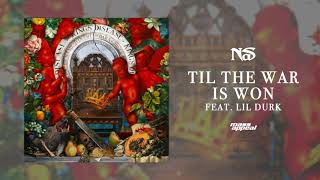 Video zum Til the War Is Won

Til the War Is Won Songtext von Nas

Jonas Brothers - I Need You Christmas