[Intro: Jack Harlow & Machine Gun Kelly]
Yo what up man?
Send me that instrumental real quick
Which one?
"What's Poppin'"
Alright got you right now
Yessir, let's go

[Verse]
Long beards but the squad's not Amish
Just bosses, dropouts and convicts
Wallets bigger than Chris Wallace
Dead presidents inside, it's haunted
Yellow tape where I'm from, stay cautious
Made mixtapes wearin' shirts with the horses
It's been a minute since I gave a fuck about a critic's
Opinion but they keep forgettin' where the bars went
Old timers, damn, y'all got Alzheimer's?
Can't say what your subconscious think
Be honest y'all hate that I switch genres
Fuck models, switch condoms
Eat beef like McDonald's
Eat rappers, Jeff Dahmer
Top five of the young rhymers
Been sick, no virus
I'm an OG now, I do not pay homage
Look, I'm a Cleveland Cavalier
Drivin' foreign engineer
At the Fashion Week in Paris
Cinderella on my terrace
Glass slipper on the stairs
Ass fatter than Shakira's
I saw her live at the Super Bowl
I was in town for a movie role
Toosie Slide in the booty hole
Smokin' woods, eatin' tuna roll
Playing cards like its Yu-Gi-Oh!
And I was only in the studio
I wake up, I'm moody, I roll up some fruity
That have more colors than a Coogi coat
I'm not a rapper that talk 'bout designer
But this is from Virgil and Louis though
Inside my closet's a million options, I put on all black like a funeral
I hop out the plane in pajamas, I do this shit daily, I don't even plan it, woah

[Chorus]
What's poppin'?
Just fucked my ex, I rawed it
Two X in the mushroom chocolate
Two X on neck, I'm frostbit
Two eggs with cheese and sausage on the bed, she fed me topless

[Outro]
Three X's next to the names of the three last hoes on my missed call list, yeah
Yeah, red eyes I can't see clear, whoa
Whoa, my bricks so white, they glow, damn
Damn, she made an OnlyFans, ugh
Ugh, can write my life in book
I'm back to my old ways, I been—
Alright, fuck it I'm good 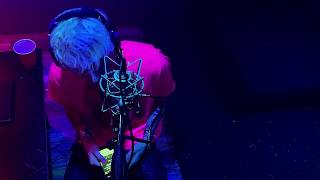 LP - How Low Can You Go TEXT

Shane Codd - Get Out My Head

You hold me close Tell me that you can read my mind How did you get to know how i feel inside Cause i didn't take you there No, oh baby Get out my head

I wished you the best of All this world could give And I told you when you left me There's nothing to forgive But I always thought you'd come back, tell me all you found was Heartbreak and...

Ricky Montgomery - Line Without a Hook

Oh, baby, I am a wreck when I'm without you I need you here to stay I broke all my bones that day I found you Crying at the lake Was it something I said to make you feel like you're a burden? Oh, and...

Don't stop believin' Hold on to that feeling Streetlights, people

JC Stewart - I Need You To Hate Me

My papa said, ''Go ahead and shine now my little star Heavens got a plan for you don't you cry One day you will break all these young boys' hearts''