[Verse 1: Lil Wayne]
Five white girls but they not Spice Girls
Just some hot girls who like to snort white girl
I'm in a all black coupe likе Dark Knight, girl
These herе Jimmy Choos, not Off-Whites, girl
Five AKs and they pop, NSYNC
Got five lil' baes and they pop and drink
If it's not bright pink then it's not my drink
These bright white links make your eyesight weak
Runnin' through a bag like YouTube money
New Orleans nigga, got beaucoup money
I voodoo somethin', I wish you would do somethin'
Milkin' this shit like the Yoo-Hoo bunny
Got the private plane lit and the Bluetooth runnin'
Tunechi gon' spit like a new tooth comin'
Everybody 5 like the FUBU company
Whole bunch of zeros like a new bag of Funyuns
Tunechi got shottas like Buju Banton
Bullets that'll shoot through mountains
Talkin' that shit and I Doo Doo Brown 'em
I punish these boys, I ground 'em
Yeah, and these funny ass boys, I clowned 'em
I'm laughin' so hard, laugh louder
Yeah, Young Money so raw, no condom
No teeth, just jaws, just tonsils
Fuck everything that they say about me
I done fucked every bad bitch that stay on South Beach
Money talk, mine just gave a nice speech
Just laid a bitch down like Laila Ali
Sittin' in the throne, tryna stay in my seat
It cost to be the boss, bitch payin' my fee
Only smoke blunts, give the J to wifey
Every now and then, I might hit the J like Kyrie
The ones that hate me the most look just like me
You tatted up and say that they GOATs, just like me
If I inspired you, that's so inspirin'
That Nina work for me, that hoe can get fired
Golf Wang Converse, I'm Lil Tyler
Might skate in 'em, might not even rock 'em
Bad bitch, nice top, nice bottom
Fuck her with my chains on, she melt the ice out 'em
Superstar shit, smellin' like roses
Superstar dick, spread it like COVID
Flag red as fuck but I'm golden
Casket lit, was up and I closed it
Opp dead, this Hell and I'm Satan
Thousand bullet shells, yeah I'm blatant
No Ceilings, she's stargazin'
Dead presidents, reincarnated
Tyler Herro, workin' on my jumper
I need a shero, fuckin' Wonder Woman
No Ceilings, third times a charm
Nigga, I don't fuck with you like Big Sean

[Verse 2: Big Sean]
Fuck what's on your tomb, it's carved in stone
Just like statues of me when I'm gone
Artists, yeah, artillery get drawn
Boy I goes in like outside was a storm
Upgraded, this ain't even my final form
Can't say you ain't been warned, you ain't on what I've been on
I live and breathe and die by this
Lifestyle shit, it just don't sit on my charm
Take my kindness for weakness then you're not strong
Whole city remind me when I'm gone
When I was down bad, I didn't complain
I was at the bottom right where I belong
If you don't climb to the top, you're not as strong
Weezy, that's my twin but we both one of one
I can teach you how to get it one on one
When you ball like this, hoe it's not a game
But I'm goin' insane all '21
Bitch think we dated off a one-and-done
And the human race, if it's not a race
It's a quest, a journey, but I'm fuckin' facin'
All the problems that I keep on runnin' from
Got a hitlist, checklist, to-do list, guest list
Super bad bitch list, I don't need a wish list
I'm already gifted, I'm done giving forgiveness
The ones that hate me the most ain't nothin' like me
I could never hate nobody I ain't met or seen
Blue Grass girl, ever since I cut her down
She been havin' wetter dreams, drop the mic, let it sing
I've been ready for the war and whatever that'll bring
From where niggas don't engage and they still let it ring (Brr)
Got back up with me and we movin' in sync
Got killer instincts but I spit that vaccine
I'm only hittin' raw if I hit it couple times
Already with the rubber and the shit didn't stink
Had a chain, gave my brother, we forever in a link
Gonna roll on the world, let's travel
Well you gotta pay a toll, hmm-hmm, yeah, whatever that means
Weezy said, "Kill 'em man, fuck all that booty shit"
I’m on that brutal shit
When I say next year is our year, ho, watch what we do with it
Ten plus in and I can't let go
Just like my girl doin' stupid shit
This a lot of y'all that owe me a check, respect and publishing
Yeah, a whole slew and shit
I'm in euphoria with a young thing and she poppin' like Rue and shit
Me and Weezy beat the beat like we Ken and Ryu and shit
I used to hesitate, took my heart
Told my head, "Lil bitch quit playin' and do this shit"
When you on like this
Every bad bitch come around with ass and titties
Need that double R when you go rags to riches
Need some R&R but now we back to bidness, lil' bitch 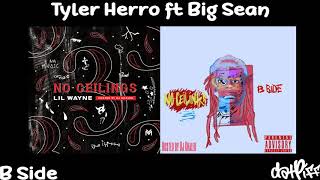