[Verse 1]
My young nigga, fourteen (Fourteen)
He ridin' round with the pole on 'em (Uh-huh)
See, shorty 'bout that life (Yeah)
Ain't ne'er nigga finna go on 'em (Nah, nah)
We was on the block shootin' dice
When some grown niggas just stole on 'em (Damn)
He hopped up with that pole on 'em
He ain't say nothin', he just blowed on (Boom, boom, boom)
See, shorty 'bout that life (Uh-huh)
It was five witnesses, local citizens (Damn, damn)
And shorty ain't think twice (Nah)
He just up and did the shit like he ain't give a shit
Bullets hit his top, pop a ligament (Boom, boom)
One to the hеad, shorty finished him (Boom, boom)
The whole city know that shorty killin' shit (Damn)
And hе ain't go to jail, yeah, shorty lit (Damn)
Five years later, shorty still the truth (Huh?)
He think that he famous, he be on the news
He don't give a damn, he be skippin' school (Nah)
Breakin' all the rules, givin' niggas blues
School or the streets, shorty gotta choose (Huh?)
He picked the wrong one, shorty finna lose (Damn)
He don't even hustle, shorty act some fool
And he ain't got no money, shorty shoulda hooped
Fuck that, ski mask, quick way
Give a fuck what you think, nigga, gotta get the rent paid
Can't get a job, got more bodies than Tay-K
You was in the safe way, we was in the gang way (Gang way)
He got the drop, found out where Lil Wayne stay
Lil Wayne been havin' bowls for a decade
Lil Wayne, he ain't play, he a headache
But shorty ain't care, he was ready (What?)
Now shorty creeped to the back door (Huh?)
And there's cameras all around this nigga crib
I don't know why shorty did that for (Why he do that?)
Lil Wayne saw him come out through the threshold (What?)
Couldn't believe, lil' shorty was that bold (What?)
Lil Wayne tried shot, shorty let go (Boom, boom)
Lil Wayne there bleedin', it was close
Few more shots, he locked up, shorty got ghost

[Chorus]
Now it's war outside (Yeah)
Don't get outside (Outside)
You ain't tryna ride (Tryna ride)
Boy, you ain't tryna die (Tryna die)
They do a homicide (Homicide)
You better pick yo' side (Pick yo' side)
Better stay inside (Stay inside)
Or nigga you gon' die (Damn, damn)

[Verse 2]
Wayne mad, this shit gettin' old (Huh?)
He hot, this beef get cold
He gettin' tired shootin' up the nigga home
He ain't never there, lil' nigga always gone
Every call he get, he thirsty (He thirsty)
He saw his cousin and murked him (He murked him)
Broad day, driveway, at church (At church)
His auntie son, had hurt him (Boom, boom)
Now shorty cryin', at the funeral, suit and a tie
Looked auntie straight in her eyes
"Whoever did this shit, gon' die
Whoever did this, mama, gon' cry
He slide, I slide, we slide
Ain't stoppin' 'til one of us die
Ain't stoppin' 'til one of us die" 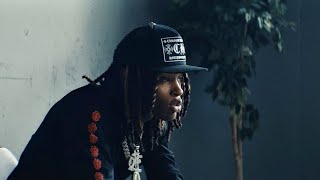 King Von - Took Her to the O