[Verse 1]
I wanna expand my brain, but I'm trapped in prison
Got me shackled up in chains for the maximum sentence
I'm tryna get out my ways to bring me back to census
And maybe teach myself some game and turn my rags to riches, mmm
Ain't no excuses we all start at the bottom
Gotta learn to speak yo' truth and that's just part of the process
Shit, if I ain't the solution, guess I'm part of the problem
You pullin' flowers out the roots when I just wanted to blossom
And I'm exhausted, but I tried my best
We needed change 'cause we tired of stress, tryna flex
Bought you a chain, but couldn't buy respect, I'm not impressed
We can't evolve unless we follow steps, it's not a test
I'm tired of frontin' like we not oppressed
And I thought if I was rich, then all my problems'd be through
'Til I made a few million and now I got more problems than you
I know it feels good to win, but it hurts a lot when you lose
Don't ever say what you gon' do unless you followin' through

[Chorus]
I'm talking execution (Execution), uh
And I don't know where I'm goin', but I'm learnin' as I'm growin'
That's the evolution (The evolution)
Hope I don't finish last, I'm still healin' from my past
I need some retribution (Retribution)
Did a lot of gettin' even, but I'm sick and tired of beefin'
What's the resolution? (Resolution)
I'm talkin' evolution (Evolution)

[Verse 2]
I gotta be honest, I never thought that I would pop this quickly
Feels good to look at my phone and see Rihanna hit me
Nah, it ain't on no shit like that, shorty a goddess to me
Just one of my friends that I can vent to when my conscious get me
Look, I ain't into what niggas is doin', I'm on some other shit
I never been the type to turn up and be on that clubbin' shit
I'm lookin' at niggas like, "Bruh, you grown, how you still love this shit?"
I'd rather be home and watch some movies with my son and shit
'Cause I ain't tryna impress nobody, that shit get old quick
Like starin' at an old flick
Trynna travel back in '06
Maybe hope for what I won't get
All that temporary happiness only last until you grow sick
And them lights start to go dim
And the walls start to close in
And the times starts to pass you by
Don't act surprised
Better be careful what you ask from God
I had some jobs, shit, I quit and took control, my nigga
Got tired of buildin' companies up that I ain't own, my nigga
It's time to grow my nigga 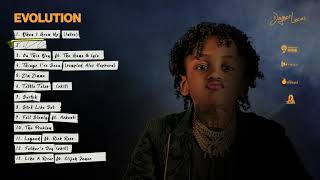 Joyner Lucas - On This Way

Joyner Lucas & Will Smith - Will (Remix)

Martin Garrix feat. Bono & The Edge - We Are The People

I need a man who's patient and kind Gets out of the car and holds the door I wanna slow dance in the living room like We're eighteen at senior prom and grow Old with someone who makes me feel young I...

Forget all of thе tears that you've cried It's ovеr (Over, over, over) It's a new state of mind Are you coming, my baby?