[Intro]
My name is Marsh and this world, I'm out of it (Out of it)
'Cause with all this A-B-C shit, I'm startin' to sound like alphabet
Ha! I kill me, this medicine's counterfeit
I was mislead by the sound of it, how am I gonna get turnt up on this Valium shit?

[Verse 1]
Checked in at the Royal Garden
To chill and avoid my problems
Until paranoia caused me to feel like I'm going bonkers
For real, think my toilet's talkin'
I spilled like, like forty bottles of pills
Think your boy is startin' to feel like a spoiled carton of milk
'Cause it just occurred
My girl's cheatin', I'm kickin' that fuckin' bitch to the curb
But the word "fuckin'" ain't meant to be a descriptive word
The type of bitch she is ain't no adjective, it's a verb
Ho thinks her snatch is magical but that's how she attracts men and who traps 'em and attack similar to an actual arachnid
Or a vaginal tarantula or black widow
In fact it'll be nothing to throw that lil' Bitch with a capital B at the back window out the black Cadillac limo like a whack demo
When I'm strapped, when I spit rapid, like a ratchet
I have [?]
Been fire bitch, I can't outrap Reynolds
Apparently it'll be great but a napkin'll do
Return of the whack sicko
Head spinnin' like invisible scratch pickles
Yeah, Shady's back, see the bat signal
It's time to go bat shit, like you accidentally ate a Louisville slugger and crapped it, I'd like to introduce myself
Hi there, bitch my name is-

[Verse 2]
I could keep beefing
Fuck is the point?
I could make it really difficult for motherfuckers to come to Detroit
If you're still looking for smoke, I already gave you an L
I'd rather just see you in hell but I should get puff on the joint (Diddy)
Wait, run it back, I said gave you an L, in hell
Puff on the joint, I am the blunt you avoid
Used to get jumped for my poems
When I was growin' up they said a slinky's a wonderful toy
My mother thought I was such a fun little boy
"Oh, what a bundle of joy!"
Until the morning she suffered a punch in the groin
From the tantrum I was throwing
Like a motherfuckin' disgruntled employee, I don't cut the beat till I fuckin' destroy it
Once I get going rain thunder it's storming
Puddles are forming, I hear somebody's voice
In my head said it's still a dream
Then he said kill emcee's
Trippie Redd, with pills on lean
Sippin' meds in the limousine
Getting head, guillotine

[Verse 3]
Yeah
So all of y'all can just suck a penis (Suck a penis)
I'll do the opposite (I'll do the opposite)
Eat you pussies like cunnilingus (Like cunnilingus)
There ain't no stopping it (There ain't no stopping it)
They say I'm such a genius (They say I'm such a genius)
When that kamikaze hits (When that kamikaze hits)
Now they call me "Butter fingers" (They call me "Butter fingers")
'Cause I just keep droppin' shit (I just keep droppin' shit)
You wanna butt heads?, shut up Beavis, ha ha
I got your bitch with her butt out
I'm hittin' a lick and she stickin' her tongue out
You got no hitters, you might be pitchin' a shut out
She 'bout to give up the dug out
I should just live in a nut house
Right now, I live in an igloo (Yeah)
And I'm not chillin' the fuck out
Treat you like a stepparent, does to a stepchild with red hair and
Plus I get dough like Ed Sheeran, so call me the ginger bread man
I'm a stan of Redman, X-Clan and I'm a Treach fan
But I look up to myself (Yeah)
Like a fucking headstand (Yeah)
So why, w-w-why else, would I call myself an alien
How could I hit a dry spell (Yeah), I'm named after the wet lands 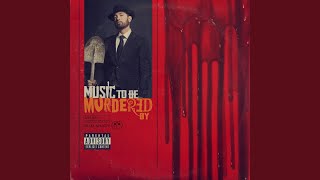 Eminem - She Loves Me